Haringey’s Labour Leaders have been criticised for wasting public money on branded items and a new logo after the Lib Dem opposition discovered the council have splashed out on branded water bottles, bearing the council’s new logo.

Last year, Haringey’s Labour Cabinet agreed to spend £86,000 on a new logo and branding for the council. The Lib Dem opposition councillors attacked the decision at the time and called for the money to be spent on local services instead.

At a council meeting last week (17th March) at the Civic Centre in Wood Green, London, Cllr Clive Carter questioned the Labour Cabinet Member about the council’s spending on the new logo (watch the video here). He also asked why the Labour-run council had felt the need to spend money producing a branded water bottle, when the cash could have been spent on services which the Labour administration have cut. The Labour Cabinet Member was unable to explain why the council had produced the water bottles, Cllr Joe Goldberg said: ‘I can’t explain exactly why there is a branded water bottle’.

The opposition councillors have now asked the council to produce figures for how much has been spent on branded items since the logo was launched last year. 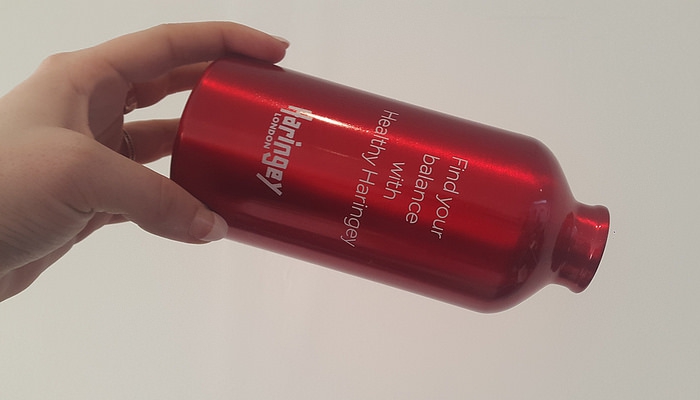 “It was bad enough Labour wasted £86,000 on the new logo. I think taxpayers will be stunned to learn that public money has also been wasted on producing branded water bottles for the Labour-run council.

“How can Labour justify spending money on a new logo, even extending as far as branded water bottles, whilst making cuts to vital adult care services and closing day centres?

“Haringey Council is a public organisation not a corporation, the resources of the Labour-run council should be spent on services for local residents, not poured down the drain and wasted on branding every item they can think of.”